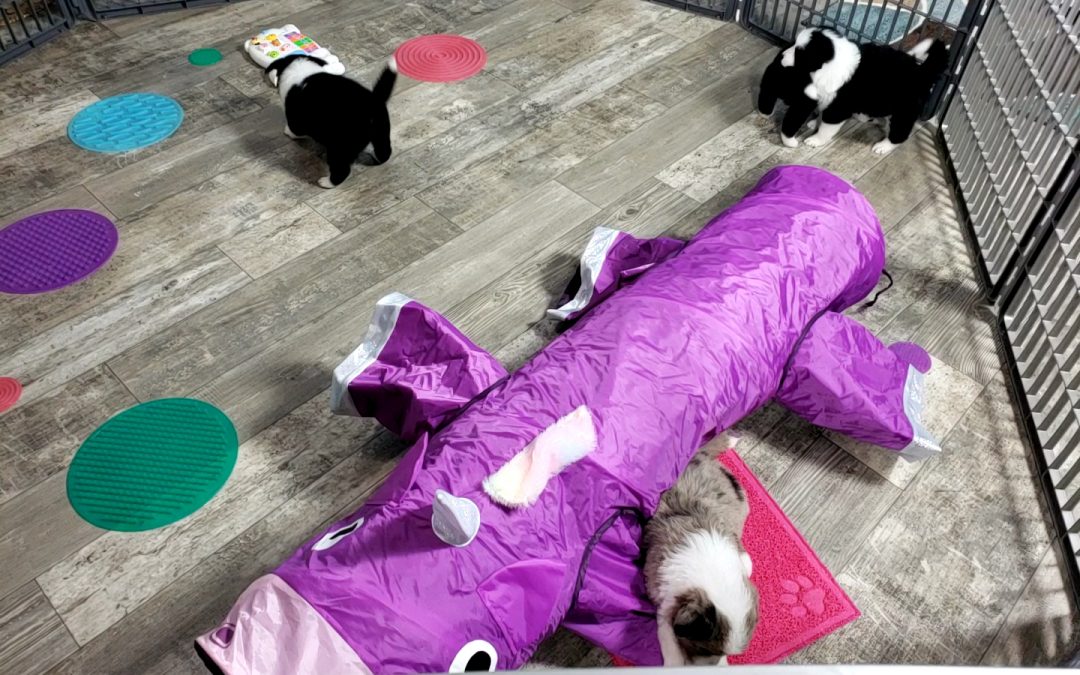 The goal is confident interaction with novel stimuli without overstimulation. All sensory objects are introduced for short periods and always supervised.

Did you know? Our puppies are now in the sensitive period, which is a period of rapid growth in their brains and bodies. Pups develop special mechanisms that allow them to learn about their world, develop social relationships, and stay safe. More than any other time in their life, they can generalize learning most easily. They only need a few repetitions to learn something during this period. We can take advantage of all of this to create stable, resilient pups by starting socialization and introductions early, providing enriched environments, introducing pups to many things and people, and ensuring those interactions are positive, build the pups’ confidence, and set up systems to help them generalize the lessons. We focus on a key concept in brain development, ‘use it or lose it.’ If pups don’t use certain aspects of their nervous system early on, they might well lose them. Puppies develop at different rates, and we don’t want to compare them. To make fast, quick learners, one aspect of brain development to consider is myelination.
Myelin acts as insulation for nerve cells. Puppy’s nerves aren’t myelinated when they’re born but do so over puppyhood. Because puppies ‘ nerves aren’t fully myelinated early on, they are wobbly, slow, and easily lose their balance. As their nerves myelinate, their coordination and ability to process increases. Myelin thickens with use, and the thicker the myelin, the faster and easier the impulses will be. We want thick myelin in the good parts of our pups’ brains, such as coordination, confidence, and curiosity. We want pups to use those things over and over in early puppyhood.
~Savvy Socialization by Dr. Gail Watkins, founder of Avidog.
This is the way 2J 2K Ranch raises our Bordoodles and our Border Collie puppies.

We use cookies on our website to give you the most relevant experience by remembering your preferences and repeat visits. By clicking “Accept”, you consent to the use of ALL the cookies.
Do not sell my personal information.
Cookie SettingsAccept
Manage consent

This website uses cookies to improve your experience while you navigate through the website. Out of these, the cookies that are categorized as necessary are stored on your browser as they are essential for the working of basic functionalities of the website. We also use third-party cookies that help us analyze and understand how you use this website. These cookies will be stored in your browser only with your consent. You also have the option to opt-out of these cookies. But opting out of some of these cookies may affect your browsing experience.
Necessary Always Enabled
Necessary cookies are absolutely essential for the website to function properly. These cookies ensure basic functionalities and security features of the website, anonymously.
Functional
Functional cookies help to perform certain functionalities like sharing the content of the website on social media platforms, collect feedbacks, and other third-party features.
Performance
Performance cookies are used to understand and analyze the key performance indexes of the website which helps in delivering a better user experience for the visitors.
Analytics
Analytical cookies are used to understand how visitors interact with the website. These cookies help provide information on metrics the number of visitors, bounce rate, traffic source, etc.
Advertisement
Advertisement cookies are used to provide visitors with relevant ads and marketing campaigns. These cookies track visitors across websites and collect information to provide customized ads.
Others
Other uncategorized cookies are those that are being analyzed and have not been classified into a category as yet.
SAVE & ACCEPT